The truth about Hollow surfboards 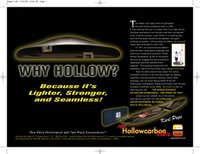 Back in the early 1930's, Tom Blake (one of the original surf pioneers) came to the conclusion that solid, heavy, wood surfboards didn't make sense. they were too heavy! So, as an innovator & craftsman, he began to construct surfings first hollow board out of plywood, waterproof glue, screws, and nails. Guess what...it worked!

The result was an enormous reduction in board weight (due to the air core) resulting in completely different flotation and feel while surfing which dramatically affected turning, paddling, and ease of take off.

The only drawback was that the slightest pinhole or crack in the shell created a leak. Water inside the structure was a problem as there was no way to 100% seal the inside after construction. His design was so unique that the plans were published in Popular Science Magazine. For the next forty years nothing much was done on the development of hollow surfboards.

World war ll helped make surfing popular as it produced fiberglass and polyester resin. When used as a covering for a balsa wood core, resin and glass resulted in the first lightweight, water proof surfboard which was introduced in the early 1950's. Balsa and glass boards were the standard until about 1959 when Dave Sweet, Hobie Alter, and a few others (Foss & Walker) began experimenting with some new stuff called polyurethane foam.

In 1959, Hobie hired a young surfer (who had just graduated from Claremont college in Pomona) to help him develop a urethane foam surfbord blank that was shapable. His name was Gordon "Grubby" Clark. (He was called "Grubby" beacuse he would sleep under his car on surf trips.)

One day Hobie himself (or one of his workers) poured too much foam mixture into one of the concrete molds and it exploded, blowing the rear wall out of Hobies Dana Point surf shop. Hobie threw up his hands and decided to give up on the foam blank program.

Grubby asked Hobie if he could have the molds. Hobie said "sure". The rest is history.

Then, in about 1970, Karl Pope (formerly of Morey-Pope Surfboards) partnered with Bob Johnson (now the owner of Island Packet Yachts in Florida) to develop the first lightweight, water proof, hi-performance, hollow surfboard ever made called the Hollow W.A.V.E. (W.A.V.E. stood for Water Apparatus and Vehicular Engineering which was their corporate name). Designers like Dick Brewer, Tom Morey, & Larry Gordon (of G&S) provided the original patterns from which the molds were made. Each Hollow W.A.V.E. was fabricated using epoxy pre-empregnated fiberglass in a 1/4" sandwich with aluminium honeycomb as the core of the 1/4" thick shell. The top and bottom of each board were molded separately and then glued together. The resulting rail seam was glassed over by hand and the board was painted.

From 1971 to 1974 over 10,000 Hollow W.A.V.E. surfboards were made and sold world wide. Many are still in the water today. Mike Purpus was the W.A.V.E competition surfer and won several pro contests on his 6'10 Brewer Hollow.

At first, Grubby Clark simply ignored the Hollow W.A.V.E. concept. But then, as these hollow boards showed up more and more in the water, he began a smear campaign which culminated in a face to face interview between Clark, Pope, and Johnson covered by surfer magazine about 1973. At the peak of production, W.A.V.E. was molding over 400 boards a week with 60 employees in Saticoy, California.

Then, in late 1973 the gas shortage hit. Long lines at the gas station were common. to make matters worse, sources for epoxy and epoxy pre-pregs dried up. With no materials available, W.A.V.E was forced to shut down in early 1974 and was sold in June of that year to a investor group of non surfers. It went out of business permantly in 1975. Grubby had won.

After re-entering the surfboard business in 1999 (after a 22 year hiatus), Karl Pope began manufacturing a new two piece version of the 1964 Morey-Pope Trisect in Ojai, California, which he called the Pope Bisect. Iinitially, Pope Bisects were fabricated conventionally using a hand shaped polyurethane foam core, then glassed as usual. The difference was that special plastic "clamp boxes" were first installed in the foam blank, then, the board was glassed and completely finished all the way through glossing. At that stage, Pope and his staff would cut the board in half (bisect it) and bore the foam for the internal carbon sleeves. Several steps later, the Pope Bisect was a reality!

Even though the conventional Pope Bisect was highly successful, Pope still felt that a hollow structure fabricated with vacumn pressure using high temperature carbon fiber prepregs, would result in a lighter, stronger, hi performance two piece surfboard which would weigh less than a conventional one piece board. He was right. In 2001 he made the first Hollowcarbon Stealth and in 2002 won the Popular Science "recreational product of the year " award. The Hollow carbon Stealth was here to stay. The Stealth is impervious to water damage and is an exact replica of the designers original. If it is punctured you simply open the drain plug, drain out the water, and repair the damage with two part epoxy (and fiberglass if necessary).

The basic principle that Tom Blake used some 75 years ago... still applies. Reduce the core weight to zero (air) then put the strength (and original core weight) back into the skin. The result is the highest possible strength to weight ratio no matter whether you use plywood and glue or carbon fiber and epoxy! You can't change physics. Just ask Grubby Clark. He was a physics major!

Now it's 2005 and others have attempted to copy Pope's basic design. They will never catch him. The remaining challenge is to get the price of the Pope Bisect to a lower level with the highest level of fit and finish. That stage is just around the corner.

As Pope has always said, "If surfers don't have to give anythng up (price, weight, performance)...all surfboards would be in two pieces". It's just a matter of time.